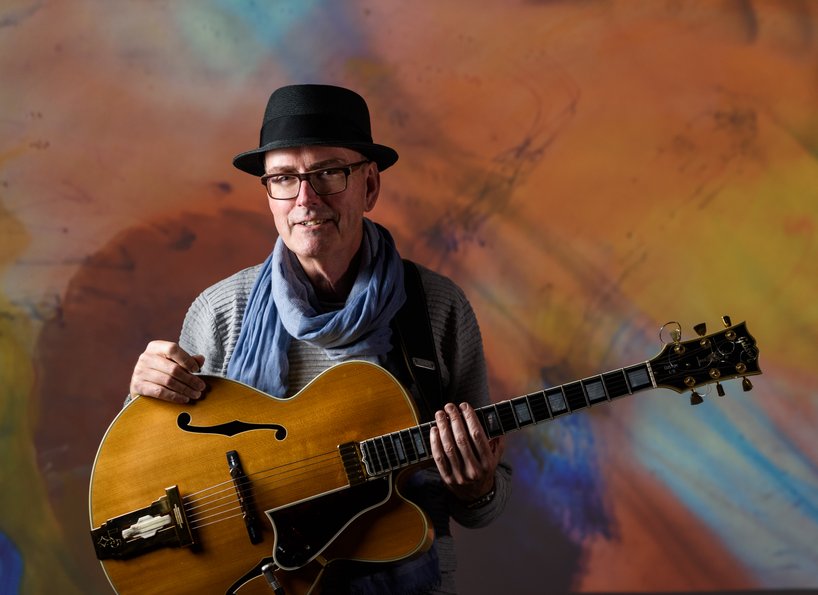 At age 62, Rolf Jardemark, definitely deserves a moment of retrospection. His first 37 years on the professional scene has taken him from jazz clubs to TV studios. From the Gothenburg Opera House to John Pisanos Guitar Night in Los Angeles.
He has released 13 acclaimed albums in his own name since Soft Landing (1989). The latest Sunset in Guitarland offers rich west coast jazz, recorded in Los Angeles with studio icons Michael Ruff, Bill Cantos, John JR Robinson (Michael Jackson) and Ralph Humphrey (Frank Zappa).
His third album Guitarland (1993) caused the Swedish TV program Jazz duel to elect him as the successor of Rune Gustafsson, godfather of Swedish jazz guitar since the 1950’s.
Rolf’s devotion to jazz and guitars started in his teens. At twelve he bought his first guitar from a friend for 1 (!) dollar. Money well spent, to say the least.
After taking his first steps with just a blues record and a chord book, Rolf saw the light.
– I saw Barney Kessel on a TV show. He looked and sounded real hip with his big Gibson and nice suit. I was listening to a lot of different music growing up, but when I heard Larry Carlton (Royal Scam) and Pat Metheny (Bright Size Life) there was no turning back, Rolf remembers.
Rolf has stayed true to his hometown of Gothenburg on the Swedish west coast, a city that has produced an impressing number of influential guitar players over the years. Besides the fore-mentioned Rune Gustafsson, Ulf Wakenius (Oscar Peterson, Ray Brown etc.) is arguably the most notable.
– I met Peter Almqvist (who would later tour the world with Wakenius with Guitars Unlimited) when I was 15 years old working extra in his dad's guitar shop. Peter gave me the tapes and showed me Wes Montgomery, George Benson, Miles Davis and John Coltrane. Ulf Wakenius has also been a good friend and inspiration over the years.
Before starting music high school at 16, Rolf had very little formal training.– Around that time I decided that music was "it" for me. I studied classical guitar at school but when I came home I took my ES-175 out of the box. I later continued at Gothenburg University and got a master in fine arts in 1985.
What were some of your earliest gigs?
– My first gigs were in high school in a guitar duo with my longtime friend Per Hovensjö. We made a recording in 1978 and eventually got a gig at Gothenburg’s jazz club Nefertiti, first as an intermission act.
Can you point out a few highly significant events in your career?
– During the tours in Scandinavia with Michael Ruff 1987-88, everything felt really professional for the first time. I remember we played at the nightclub Alexandra in Stockholm, the leading hot spot of the time. The final show was in Gothenburg the same day Michael Jackson was in town and since we knew his drummer Ricky Lawson we held a jam session with Ricky, keyboardist Greg Phillinganes and Jackson’s still unknown backup singer – Sheryl Crow.